"Malawi has historically been overlooked as an interloper at the table of great safari destinations. That is until a lion reintroduction program commenced in 2012 and travel editors suddenly started salivating.

Aside from its animals, what immediately captures you about this vivid country is its geographical diversity. Slicing through the landscape in a trough formed by the Great Rift Valley is Africa’s third largest lake – Lake Malawi. Whether it's diving, snorkelling, kayaking or chilling out on one of its desert islands, a visit to the lake is a must.

​Suspended in the clouds in Malawi’s deep south are the dramatic peaks of Mt Mulanje and the mysterious Zomba Plateau; both are a trekker's dream, with mist-cowled forests and exotic wildlife. Head further north and you'll witness the otherworldly beauty of Nyika Plateau, its rolling grasslands resembling the Scottish Highlands." From the "Lonely Planet" 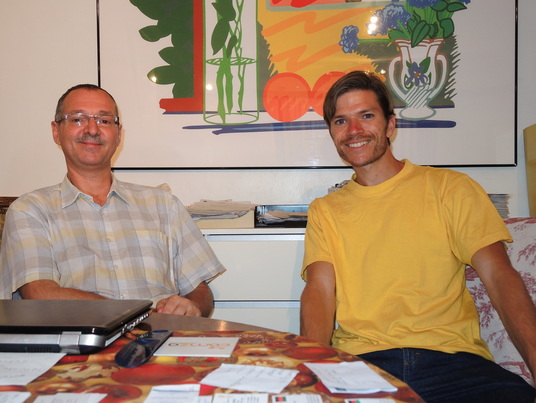 My host, Chris, in Blantyre 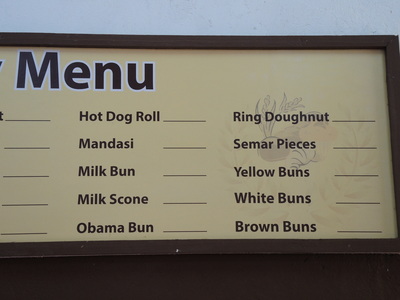 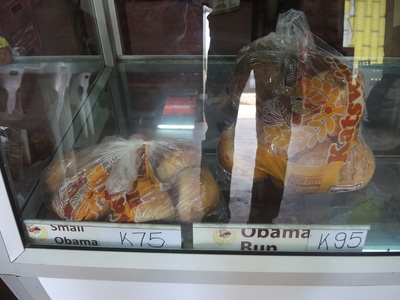 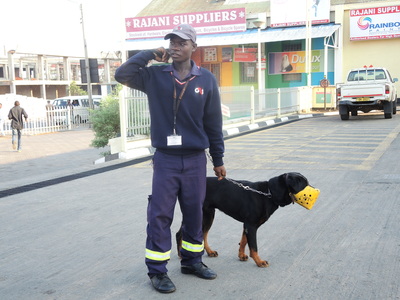 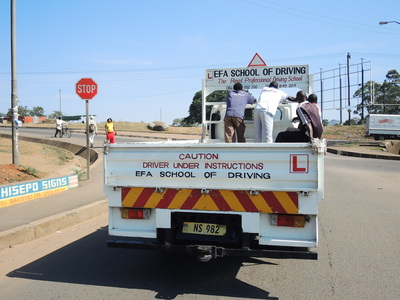 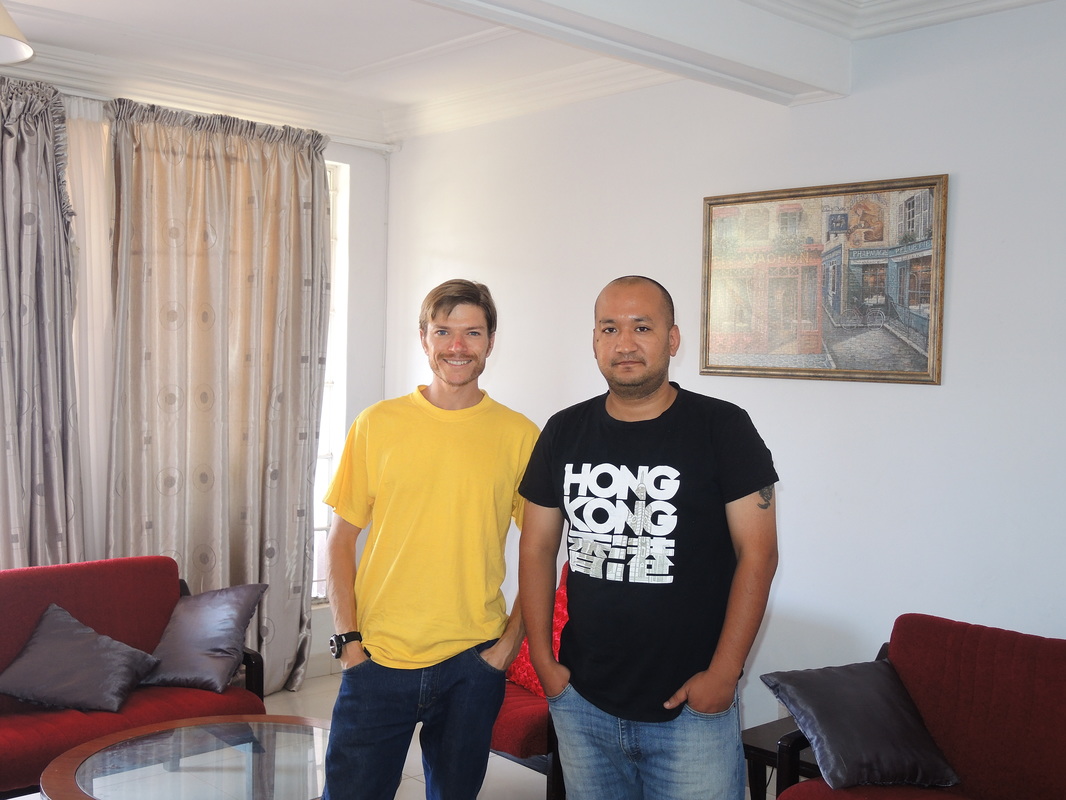 My host, Prad, in Lilongwe 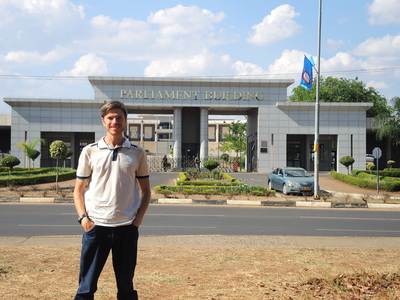 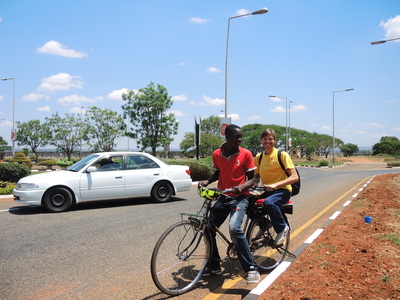 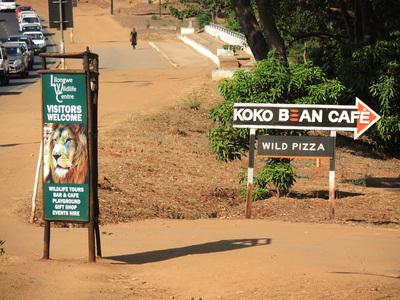 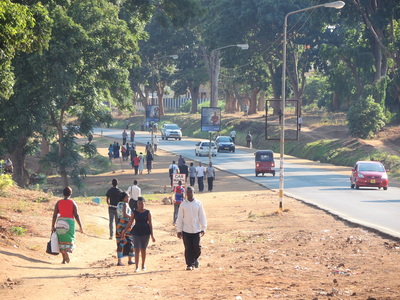 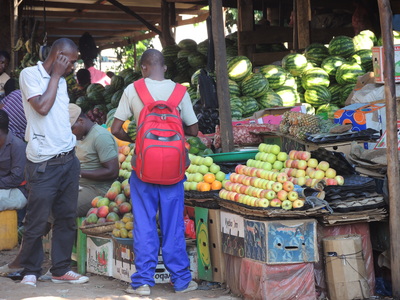 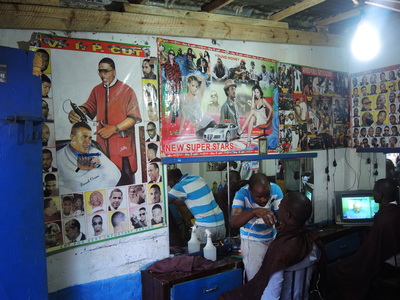 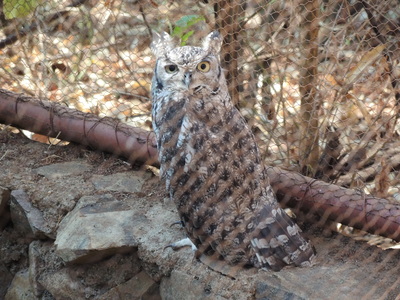 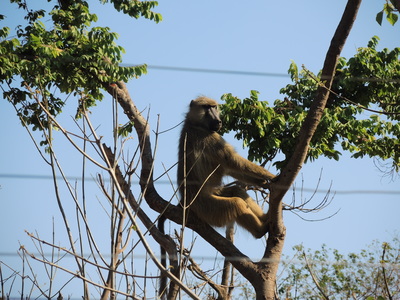 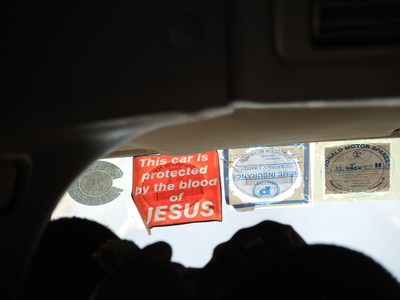 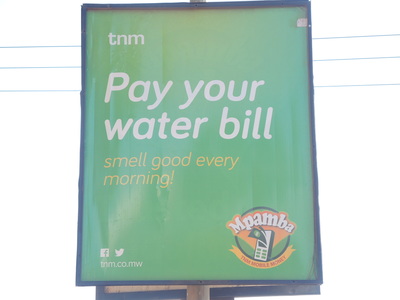 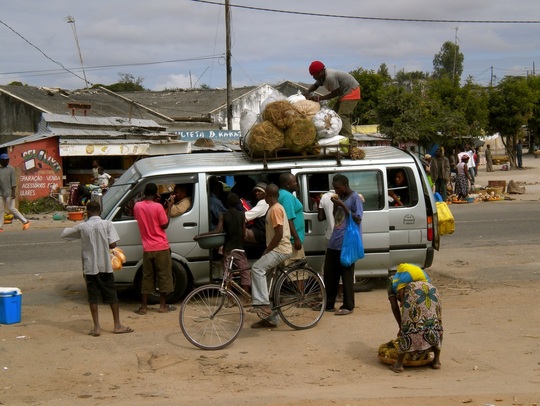 November 16, 2015 / From Nampula, Mozambique to Blantyre, Malawi
​
E - Mail / 6:24 AM (2 hours ago) Pacific Time.
I arrived in Blantyre after leaving Nampula yesterday at 5 am.  I woke up at 3am to go to the bus station.  The bus was full, so I had to got a ticket for standing room only.  The bus had 63 seats and 12 people had to stand plus there were 5 children in the laps of mothers, so that was 80 people on board the bus.  We went to Cuamba, which took us almost 8 hours.  I sat on my bag in the very back, but the second half was dirt road, so I stood up for that portion because it was too bumpy.

The bus was so crammed with hardly any room to even stand.  After doing that for 8 hours, we arrived in Cuamba at 1pm.  It was a dusty dirty town and there were two Italians on the bus, but they had seats since they bought their ticket the day before at 10am.  When I arrived in Cuamba, I got into a minivan to go to Mandinga, which was a 3 hour journey over dirty road.  They also packed up the minivan and we wouldn’t leave until we had 23 people packed into the minivan with 4 people per bench even 4 people facing backwards on the ledge behind the driver’s seat.

Then there were 2 passengers in the front seat next to the driver.  It was so crammed that I couldn’t even move, so my legs hurt so much.  We finally made it to Mandinga by 5:30pm and then I had to rush on motorbike to the border to enter Malawi before it closed at 6pm.  I paid $50 for a transit visa and then it got dark.  I had to sleep in a local hotel room, but there was no electricity, so after exchanging money, I followed the guy in the pitch dark to this hotel, where I checked in for $3.

The bed was made, but then I realized there was some sand in the sheets, so they problem never washed the sheets.  I took a bucket shower using a candle for light and then went to sleep by 9pm because I would have to wake up at 1am to catch the next minivan at 2am to get to Blantyre.  I got up this morning and got in that minivan.  Again, we had to pack it up until there was no more space to even move your feet or arms.  After we loaded it up with 22 passengers plus the conductor standing at the sliding door stooped over and the driver in his seat, we left at 2:30am for Blantyre.

We stopped along the dropping off and picking up more passengers.  We stopped at police checkpoints along the way.  We got to Blantyre at 6am, but I didn’t have my host’s number, so I had to wait until the internet shop opened.  Once it opened, I got the information and then called him and find his address.  It took forever finding the address, but then I got there by 10am.  I was so tired from that journey that I had to take a nap afterwards.  I didn’t even eat because it was so stressful that journey.

But, there are no flights between Mozambique and Malawi.  My host is a German guy and he told me the most important thing to see is Lake Malawi.  I’m so tired now that I don’t feel like doing anything anymore.  So, I’m going to plan the next few days now. 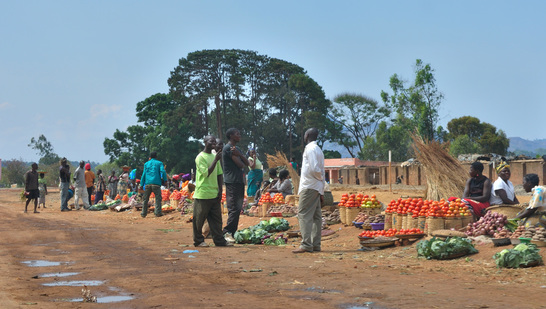 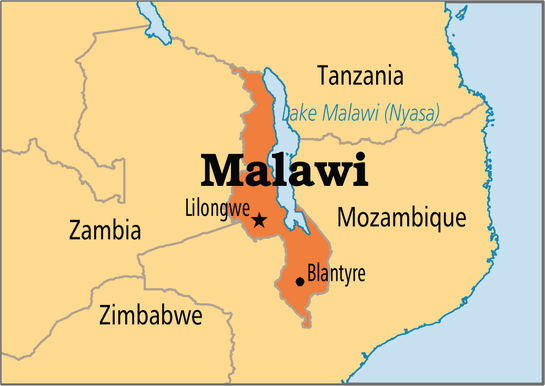 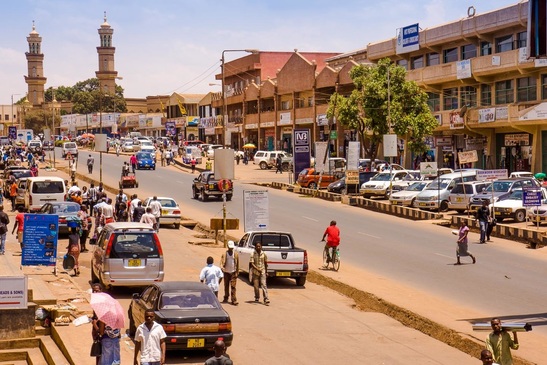 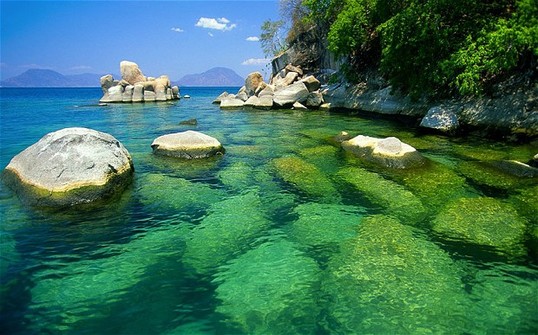 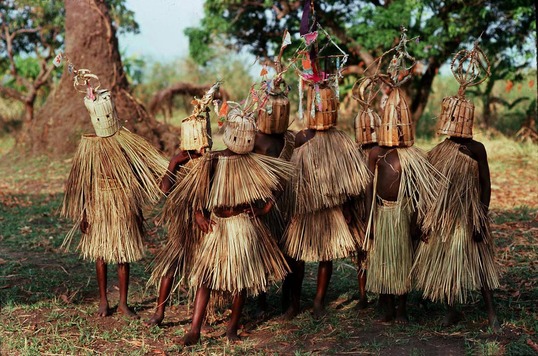 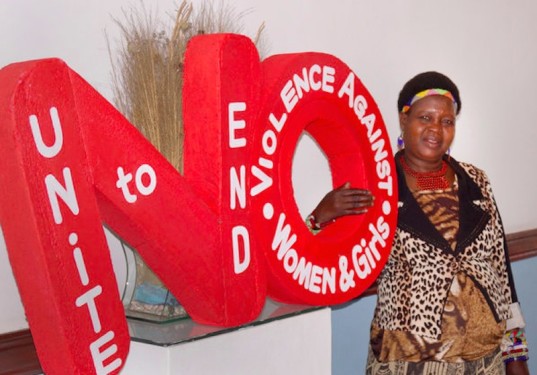 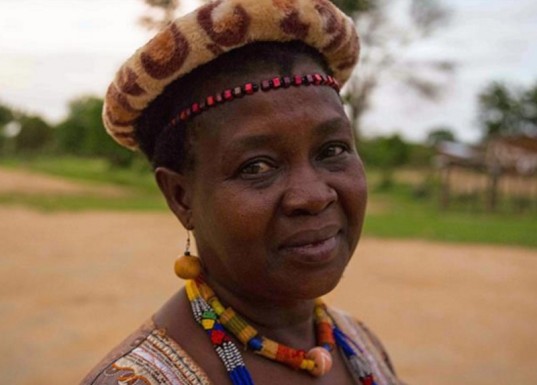 ​and sends girls back to school

Theresa Kachindamoto, the senior chief in the Dedza District of Central Malawi, wields power over close to 900,000 people… and she’s not afraid to use her authority to help the women and girls in her district. In the past three years, she has annulled more than 850 child marriages.

Fe, sent hundreds of young women back to school to continue their education, and made strides to abolish cleansing rituals that require girls as young as seven to go to sexual initiation camps. With more than half of Malawi’s girls married before the age of 18, according to a 2012 United Nations survey — and a consistently low ranking on the human development index, Kachindamoto’s no-nonsense attitude and effective measures have made her a vital ally in the fight for women’s and children’s rights.

Kachindamoto, who was born in Dedza District, had been working as a secretary for twenty-seven years in another district when she was called to come home and serve as a chief. Upon her return, she was dismayed at the sight of 12 year-old girls with babies and young husbands and quickly began to take action. Last year, Malawi raised the legal age to marry to 18, yet parental consent continues to serve as a loophole to allow younger girls to marry. Kachindamoto ordered 50 of her sub-chiefs to sign an agreement ending child marriage in Dedza District.

When a few male chiefs continued to approve the marriages, Kachindamoto suspended them until they annulled the unions. In addition to annulling the marriages (330 in June of 2015 alone!), this fierce chief sent the children back to school, often paying their school fees with her own money. She has also asked parliament to raise the minimum age of marriage again to 21.

In an area where girls are often married early to ease a family’s financial burden and where one in five girls in Malawi are victims of sexual abuse, Kachindamoto is also taking a stand against the cleansing camps where girls are routinely sent before marriage.

​The sexual initiation rites that take place there are extremely disturbing, particularly in a country where one in ten people has HIV. Kachindamoto is threatening to dismiss any chiefs that continue to allow these controversial practices. Kachindamoto has faced plenty of opposition to her efforts from parents and community members, even receiving death threats, yet she remains determined to continue changing minds and laws for the benefits of Malawi’s females and their futures. In Kachindamoto’s own words, “If they are educated, they can be and have anything they want.”